And The Winners Are …

Four:  Daryl Bell. An apt throw back edit for the times we are in.

Thank you to all entrants.  Very inventive and creative!

Power up your camera and open up your creative eye for the Salt Cellar Challenge:

In your home you have a salt cellar (aka salt shaker).  Take a creative photo in which it is the main subject.

Entries must be received by me no later than midnight Wednesday (April 1) [this is not an April Fools Joke – this is serious stuff].

The winner will be chosen by popular vote.

To add a little spice to this challenge, the prize for the photo garnering the most votes is a high quality print on paper or canvas (winner’s choice).

The Story of Salt and Pepper

With many thanks to the memory of Kate and Anna McGarrigle for the relevant verse:

Salt and Pepper were a happily married couple who had already celebrated their twentieth anniversary. Salt was a large and solid man, steady and firm, one who could be counted on to not get too excited in a crisis, nor too gloomy when life dealt him a bad hand. Over the years, like many couples, Pepper had grown to look a bit like Salt, and had developed the same stolid personality and reaction to the ups and downs of life. Their neighbours and friends always thought of them as an inseparable pair.

Salt and Pepper had two children, a boy Salt Jr, and a girl, Pepperita. The kids are now well into their teens. Both parents doted on the kids, taking part in many activities with them, camping, road trips, sports, music camps, etc.

But then Flower came to town. Young, beautiful, petite, bubbling with energy, she bewitched poor Salt. He became more than enamoured of this exotic creature and, abandoning every personality trait, every belief, every behaviour that had made him who he was, fell in lustful and passionate love with Flower. Salt abandoned Pepper, filed for divorce and the new couple fled town, later to marry, Salt taking on a younger and smaller wife.

Pepper was bereft and couldn’t imagine life without Salt. She slipped into a deep immovable depression, spending most of days lying tearfully on her bed. The kids tried to cheer her up but, so far, to no avail.

An unhappy ending to an unhappy tale. 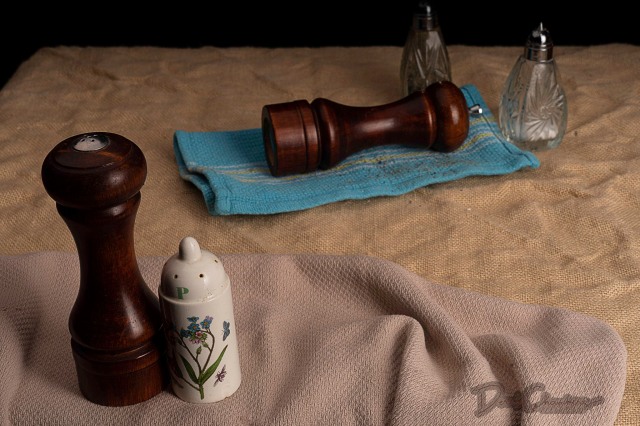 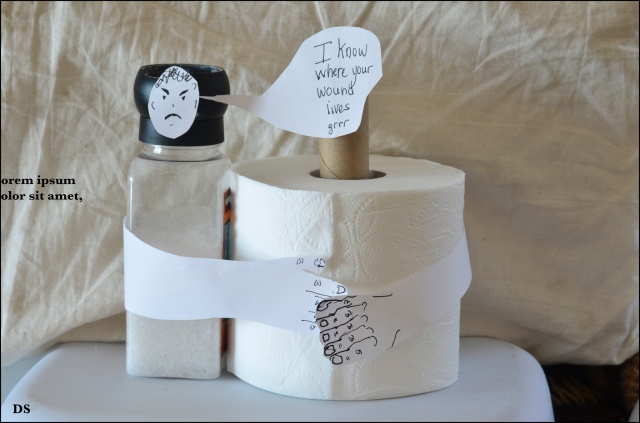 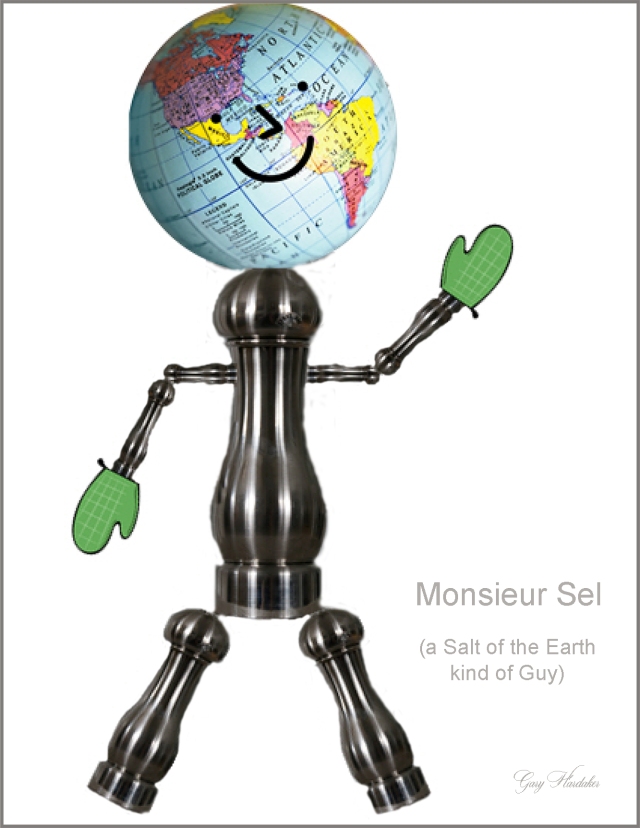 Adventures of the Salt Family 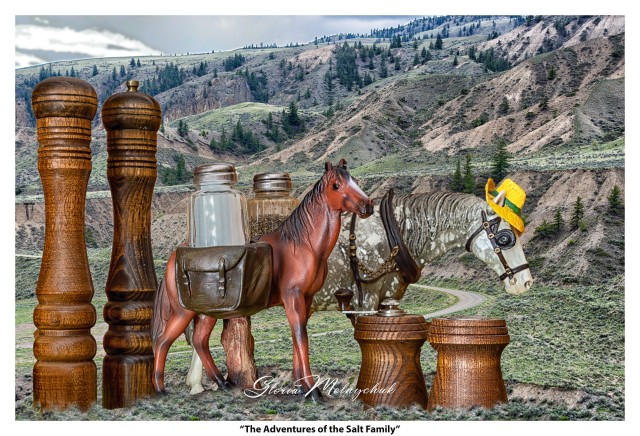 Once upon a time long ago Himalaya Salt ruled his kingdom in the faraway
mountains. He had a beautiful wife, Peppercorn, and two children, Salt and Pepper. His father, Coarse Salt and Mother, Cayenne, lived with the family in their castle on Rock Salt.

One day the family decided to go on vacation to the other side of the world. The
children rode together on the pack horse, Nutmeg, and the old folks trudged along leading the way with their faithful old nag, Allspice. Keeping up the pace, and encouraging everyone to enjoy the journey, Himalaya Salt and Peppercorn, commented on points of interest along the way. This excursion was very exhausting for Coarse Salt and Cayenne as they were in the winter of their life journey on earth plane. The children, Salt and Pepper, were thrilled to see the outside world and constantly inquired: “Are we there yet?”

Through the sage brush country of Alkali Salt grass the family trudged along seeking a new adventure at every turn in the trail. This country was very different than their mountain home. The thrill and enthusiasm of the children made the elders see the world in a different light. They looked at the horizon and savoured this moment in time, no need to dwell on what may have been or what might be tomorrow.

It had been many blue moons since Himalaya Salt had visited with his distant cousin,
Celtic Sea Salt, and his wife Lemon Pepper. Perhaps that is where the Salt family should
go. It was agreed and off they went. They would stop to see Kosher Salt along the way.
He is usually sprinkling his flakes on the beef in this area to aid in removing the fluids from the meat.

Upon their arrival at the coast the family were welcomed into the home of Celtic Sea
Salt. The children were cautioned against going near the water, but they were so thirsty
after the long journey, the temptation of cool clear water was hard to resist. While the
adults discussed world politics and the stock market the children slipped away, heading for cool clear water. Little did they know why they were cautioned to stay away and into the cool water they went. Poor little Salt, he soon began to fade. Pepper tried to save him but it was fruitless, he soon was gone to join others of his family that had caused the sea to be salty.

Now, as this story ends Salt has met his cousins Fleur de Sel and Hawaiian Salt in the
vast ocean of time.

And that my friends explains why the sea is salty and women are the spice of the world.

Since it feels like we’re reliving 1918 I thought I’d create a photo that looked like it was from 1918. 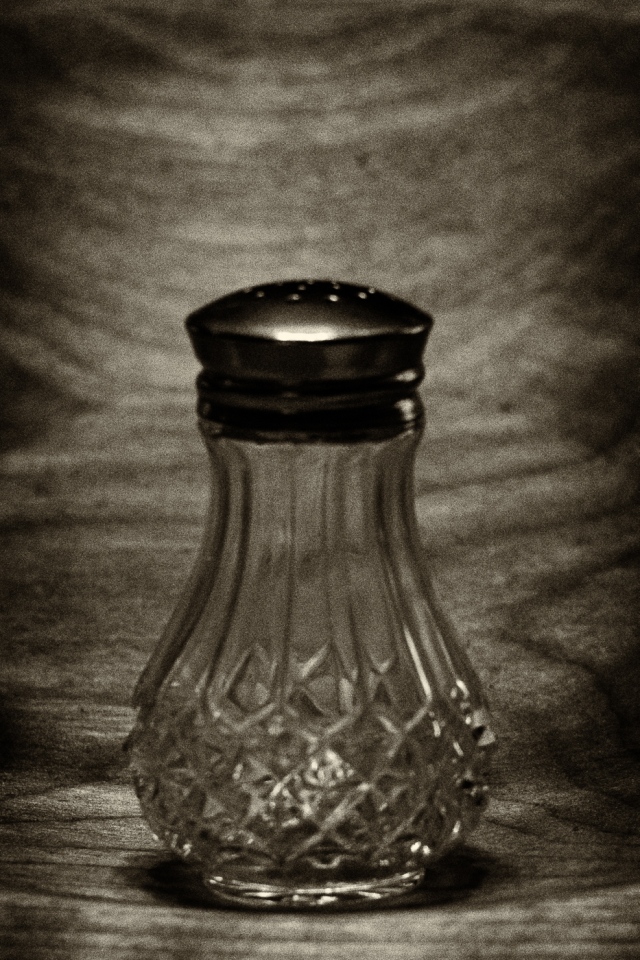 A Series of Puns

A Salt and Battery – Diane Hopp

A group of condiments was exploring an old cellar. ….. One of them was a salted – Diane Hopp